I’d bet a significant amount of money that if I looked in your company’s employee handbook I’d find a statement that says you have an “open door policy.” This infers that people have access to anyone at any level at any time. I’d love to say that this is really the common practice in organizations, but it often isn’t. That’s because being an open door is tough.

Doors can exist in one of two positions – open and closed. I know that sounds obvious, but doors play a bigger part of our careers than we recognize. You hope that people would be willing to communicate openly, but we hesitate, or think that people have some hidden agenda, when they meet with us. That may happen every once in awhile, but it isn’t the norm. The challenge is that negative experiences have such a huge impact on us that they override any positive ones that we have. We end up communicating less than we should or we give partial messages to folks hoping they can come to the conclusion we have in our heads.

I find this to be the case with HR peers as well. I understand that we work with people at all levels and that it can be challenging. However, shouldn’t we be the ones who set the standard and expectation of being accessible? If you ask people in your company who work in other departments, I think you’ll hear that we’re not as accessible as we could be. 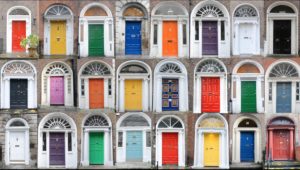 So, how can we become open doors?

The easy answer is practice. The hard reality is that it takes courage, patience and a willingness to meet and listen to ALL people. This includes the people that you tend to interact with only when you have to. We all spend more time with people who we’re comfortable with. It’s human nature. Well, we need to fight human nature. Every employee deserves our time and attention. You may be the only person who’s giving an employee an audience. It could keep them engaged, and even better, understood so that they know they’re connected to your company.

Secondly, I think you need to open doors for others. Too often HR is categorized as the group that shuts people down. That may be needed in certain situations, but it’s an awful moniker to carry with you. We live in a time that is extremely self-focused. I’ve never seen this work long-term. You may see short-term success or visibility, but you can’t sustain it. Opening doors for others is something you can do for your entire life.

Recently, an HR friend of mine was in transition. She contacted to let me know. I wanted to make sure she was okay and let her know she had someone willing to make connections for her that she may not be able to do on her own. I also encouraged her to see if she could create her own role and position within a company. I told her to share that she could open doors for their organization by bringing her knowledge, skills and experience. I reached out to two dear HR friends who lived in her area of the country and asked them all to meet each other and network with each other on purpose.

At SHRM17, she was able to share all that had happened after our conversation. She is now a close connection with the two folks that I introduced to her, she found a few new HR roles to consider and convinced a company to allow her to create a role that they had not seen in the past. I was geeked to hear all the great things that occurred from a phone call and two e-mails. Three opened doors.

This week, take a look at two things: (1) Are you truly an open door at work for ALL of your employees and (2) Are there folks in your life that you could open doors for?

When others shut doors on you, and they will, don’t get discouraged. Just look for the next opportunity where you can step in, reach for the knob and pull open a door. It may change your life and the life of others. Trust me. Opening doors is worth it.