When I was a junior in high school, I took Chemistry. The class was a mix of juniors and seniors and was sure to be challenging. On the first day, a very young man walked into the room with a white shirt and a tie as we were chatting away and not paying attention. He turned to the chalkboard and wrote his name – Mr. Lusk.

He didn’t appear old enough to be a “Mr.” We soon found out that this was his first teaching opportunity after graduating from college. So, he was sitting in a room of students who were only four to five years younger than he was. Mr. Lusk was soft spoken and somewhat cautious in his approach. It had to be daunting to walk into a room where most of the students had been together since kindergarten !!

His first few weeks with us didn’t go well. You see our class had a mix of nerds (me included) who were geeked to learn Chemistry, and jocks who felt they had to get this class under their belt for college. They were there reluctantly and made that known every day. Mr. Lusk was strong even though he seemed meek. He had a down to earth teaching style and he made the different facets of the subject jump off the pages. A group of us (on the nerd side) decided to take him under our wings, and fight off those who didn’t want to be there.

A bond developed with four of us and we called ourselves “The Conclave.” We began to stay after class and also spent our study halls down in the chem room. We began to excel as he kept investing in us, and we, in turn, kept supporting him when others tried to dispel him as a teacher. Mr. Lusk survived and even started a second year of chemistry and a physics class that the Conclave willingly took. That was in 1980. 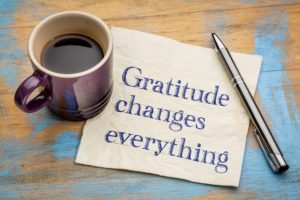 Mr. Lusk is still a fixture in Ada High School. He has been the same great teacher who invested in me almost forty years ago. His investment in me and hundreds of students since has left an amazing impact on every life. I have kept in touch with him and I tell him often how grateful I am that he got through those first few months when everyone tried to make it so hard for him. I’ve watched him become a father of very successful kids himself, and have shared my life with him as well.

His willingness to invest in others deserves more than a “Thank You.” Giving thanks is wonderful and polite, but he deserves gratitude. His example set the stage for me, and I want it to be an example to set for you as well.

If you’re in HR, you have the chance to be the person who invests in others. It’s a choice. You can either be like Mr. Lusk, or you can pass over others to get to the work at hand. I’d rather be the person who invests because you never know that the time you are intentional may have an impact and a legacy you never saw coming. People are worth it and deserve your focus, your time and your encouragement.

Who are you investing in? Are you being intentional to make sure others are acknowledged and lifted up? Why not?

This week I want to encourage you to do three things. The first is to switch your focus to one where you will invest in others. Secondly, go to those who have invested in you and thank them. Showing gratitude to them will sow the seeds in you to show gratitude to others on a consistent basis. Third, make sure you check out the new Impact Makers podcast from Jennifer McClure and subscribe to it !! She is featuring those who’s she’s seen make an impact on her and others. It’s a great example of what gratitude can do.

Mr. Lusk probably didn’t have the goal of making such a substantial difference in the lives of his students. He has, and I for one, am grateful !!