I’ve just returned from SHRM18, and this was one of the best SHRM Annual Conferences I’ve attended. It was the largest and most attended in SHRM’s history, and yet it felt very accessible and easy to maneuver. The attendees were geeked whether they were in sessions, browsing the SHRM store, enjoying the keynotes or taking in the wonder of Chicago.

At the end of one of the days, the 17,000+ attendees all seemed to be leaving at the same time. I was in the midst of everyone else and was hot and tired – just like the masses. I walked out into the city heat to grab a cab and was told to go back in line. I didn’t know there was a line, so I headed back inside. What I saw was staggering !! The queue for the cab line was enormous and folded back on itself many times. The lines for the shuttles seemed to go on forever as well. I also looked at a countless number of attendees looking at their phones waiting for their Uber or Lyft to arrive.

After observing all of this, I tried to lighten the tension by suggesting people step out to get a drink. I was met with scowls and grumbling. This didn’t seem to be going well in general. So, I made a decision. 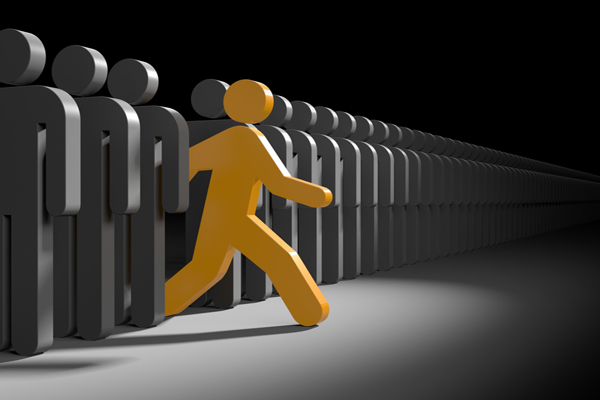 I stepped out of line !!

I walked out of the cavernous McCormick Center and started walking down a street. I looked at a map on my phone and saw that I had a short 46 minute stroll in front of me as the sky above me darkened with thunderstorm clouds. I didn’t care and kept walking. After about eight expansive Chicago blocks, I spotted a cab by itself across the street. The driver was checking something in his trunk, and he was heading back to get in. I screamed across traffic, “Sir !! Sir !!” He saw me and beckoned me over. I zig zagged through passing traffic and collapsed into the cab dripping with sweat.

The driver calmly greeted me and asked, “Hello !! Where to sir?”

I told the driver my destination and then he began talking. He asked me how my day was and where I was from. He told me he was originally from Lagos, Nigeria and that he had been in Chicago for over ten years. His only job in the states has been driving a cab in Chicago, and he loved it. He loved talking to passengers and hearing about who they were, what they did and why they were visiting Chicago. He was wonderful, welcoming and fascinating !! All of my anxiety and stress of rushing back to get to the next HR event wanted, and we had a fantastic conversation.

As we pulled up to my hotel, I extended my hand out to the driver and said, “My name is Steve.” He replied, “My name is Sunday.” I thanked Sunday for the best experience of my time in Chicago yet.

I never would have met Sunday had I stayed in line. The lines were the most obvious choice because they were the system that was provided and that people were used to. There’s nothing wrong with the system, but it was bogged down. It was leading to frustration and angst because people wanted to get out of the building for the day.

This sounds like HR and the world of work that all of us face. If we would have the courage to step out of line vs. trying to contain people within lines, we’d have a completely different experience every day. We would see what’s happening all around us because we’d be in different environments. We’d have to fend for ourselves and learn how to solve situations from a fresh perspective, and we’d enjoy the adventure !!

All of the “learnings” we can encounter can occur in the most unlikely places. The key for all of us is that we intentionally – step out of line !!