(Yes, I know I sound like my Dad, but hang with me)

. . . you used to write notes to people to get their attention. It was like a spy movie because you didn’t want to get caught, or have someone read it who was not the intended audience. People wrote notes so often that some came up with their own “language” so that any intercepted notes seemed like gibberish. You always were hoping to get a note because it meant that someone wanted to communicate something cool, or ask you do join them in some activity. There were countless people who made dates this way and probably became people’s parents !!

Writing a note takes thought, intent and emotion. You didn’t want something to be seen as dull or meaningless. People weren’t careless with notes. Sending a note took some risk to put yourself out there because you weren’t sure what the response would be.

Flash forward to today. Now, if someone sends you a message electronically, they expect an answer almost before you actually send it. If someone doesn’t respond, we think the worst possible scenario for the reason(s) we were shunned. Electronic messages are also often not reciprocal. Tons of people post, snap, tweet, etc. about their lives and don’t really care if others do the same. Oh, we long for the affirmation like or emoji to our posts, but 90% of them are about ourselves, our experiences, or our interests. I’m not bashing these messages because I’m as active as the next person when it comes to being visible on forums. 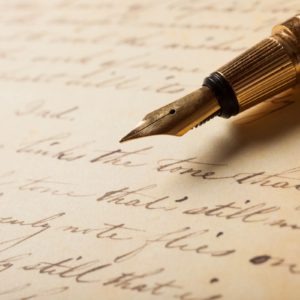 I miss the days of notes because they were going TO someone and asking them to be involved. There were also notes that would tell someone how you felt about them, and some were even notes of encouragement. I played basketball all throughout my Jr. High and High School years and I had a secret person who would write notes before each game to wish me luck and that the team would play great. Every player had these spirit sleuths for each sport. It was amazing !!

Today’s society, and workplace, yearns to be more “human”, but we don’t incorporate personalization much at all. We’re so concerned about being politically correct, that we’ve ceased sharing “notes” with people to encourage them in their work and take steps to see the best in what they do. I’d like to see that change.

HR needs to come to terms with the fact that workplaces will never become more human unless HR becomes more human itself. Never. I get a sense that all employees are longing for a genuine connection and path to engage with someone with whom they work. So, I encourage you to step in the gap. You may not be the final connection, but you should be the person who initiates this and starts the process.

This week, send a note to someone. It would be awesome if it was handwritten !! However, if it’s electronic, make it a note. Check and see how someone’s doing. Write someone and tell them how much they make a difference in your life and the lives of others. Be positive and encourage others on purpose.

Keep doing this until it becomes a habit. Be a person who’s willing to break through the mire of negativity and the noise of the endless rush of life and send a note. When you do, you will change the direction of someone’s day. It may be the exact thing they need at the right time.

I need to go now because I have some notes to write.

SHRM17 just wrapped up this week in the midst of tropical storm Cindy knocking on the door as everyone finished the conference and headed home. Ironically, the energy that emanated from the event was almost as moving as the storm !! The vibe this year was positive, collaborative and you could feel a sense of togetherness throughout the entire week.

I had a lofty goal to meet every attendee, and I fell a bit short. It wasn’t for a lack of effort though. I was astonished how many people I observed that continued to move from session to session without meeting a single person. Please note that I don’t think people had to meet me, but I did hope that they’d connect with someone !!

I noticed this continued “eyes forward” approach while people were waiting to hear me present. As I saw this, I asked the AV folks to turn up my mic, and I implored the people who were kind enough to choose my session to look up from their phones and meet the people around them. The energy jumped through the roof, and I actually heard from someone later who said, “I appreciated the reminder to meet others because I was caught up in the stuff at work, and lost sight of others sitting right next to me. I liked meeting everyone.”

I may sound like a broken record, but, taking a page from Patrick Lencioni, I will keep reminding people of what seems simple – because people aren’t doing it. I find it so hard to grasp that HR pros almost refuse to meet their peers. They seem so set on getting to a class or training session to wait to see the person at the front of the room speak. I hope that those speakers rock and that you learn from each of them. But, what if the person sitting next to you was facing the same issues and challenges you were, and all you had to do was say, “Hi, my name’s ________. And you are?” 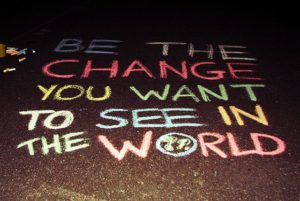 I closed my session this year with my most favorite quote from history. Ghandi said, “Be the change you want to see in the world.” I don’t mean to overstate, or simplify this, but I truly want to see HR become a global community that is connected though people – on purpose !! I know that if this happens, then the desire for us to look at our field, and the people in it, positively won’t be some aspiration, it will be a fact.

I loved meeting the new folks that I did during SHRM17. The ranged from a room full of students and young professionals on Sunday, to HR folks who were from Cincinnati (where I’m from) whom I hadn’t met in the past, to people from Guam, Australia, Canada, India and Brazil. Each one of these HR pros is now a connection and I hope we stay connected for years to come !! In fact, I wish I had more time reconnecting with some of my friends who I get to see more regularly, but our paths didn’t cross as often as I’d hoped.

I ask those who attended SHRM17 to not let the energy and vibe of such a massive event slip by as we all return to our regular roles and duties. You experienced a shift and not it is up to YOU to be the change in your world. I plan to keep the movement going, and hope you join in !! 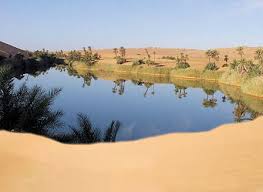