I am a big fan of Social Media. I use most of the well known forums liked Twitter, Facebook and Linked In. I dabble in Instagram and Pinterest, and am always interested in watching other platforms to see what they offer. I think they’re an incredible way to communicate with people globally and they provide avenues to connect that we didn’t have in the past.

I know there’s a negative side to Social Media and the way I look at it is just like all areas of life. If you want to find the dark side of something, you’re sure to find it. I choose not to – ever. I use the great wisdom of Eric Idle from Monty Python – “Always look on the bright side of life !!” (double exclamation points are my addition, always wanted to be a Python)

The biggest challenge for me is taking note of how I use my time on Social Media. It’s easy to get bombarded with friend requests, likes, invitations, retweets, etc. It can grab your attention and take it away from other things. Let me share a story . . .

This past week I was on vacation with my family in San Diego. It was our first time there and we rented a condo that sat up high enough on a hill to see the rolling waves of the Pacific Ocean. We took in the phenomenal San Diego Zoo our first full day and I took tons of pictures of the animals and the park. The second day we went to Coronado Island and the beach. Again, incredible and tons of pics. I felt compelled to post a few !! The third day we ventured to Cabrillo National Monument which is a National Park. 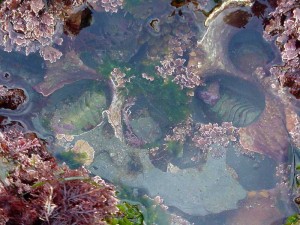 We decided to see the tide pools before the monument, lookout and light house. To get to the tide pools, you hike up and down the cliffs alongside the Pacific as the waves do their best to erode the shoreline every few seconds. It was physically challenging, but I wouldn’t have missed it. The views were panoramic and inspiring. We took our time and were careful as we worked our way over to the area where the pools were formed inside a rock ledge. As the kids and my wife were taking pics of their own, I leaned over one of the pools and said to my wife, “Debbie, you have to see this !! It’s beautiful !!”

And . . . then I slipped and slid down into the tide pool. I panicked and tried to push off the bottom, but never felt it. I was up to my chest (and I’m 6’4″) when I grabbed hold and pulled myself out of the tide pool. The kids yelled “Phone !! Camera !!” I yanked them out of my cargo shorts, but they were blank, black rectangles. My “swim” took less than 30 seconds.

I was safe but drenched. Everyone around asked if I was okay, and I was thankful I was. I’ve seen many posts from my friends about the need to be unplugged from Social Media and I agree with them. I’ve taken breaks, but I’ve never had one taken for me. It seems that my slip broke the chain I didn’t know I had.

When we got back on the trail to see the rest of the National Park, Debbie reminded me that I lost a phone and camera, but she could have lost me. I was only a few feet from dropping down into the ocean. A sober reminder.

The break was what I needed because it was life before Social Media and technology. The rest of the trip was better than the beginning !! We saw one of my past Eagle Scouts who is training with his brother at the Olympic Training Center in Chula Vista to try and make the Archery Team for the 2016 games in Rio. We climbed the California Tower at the San Diego Museum of Man and saw the Museum of Photographic Arts in Balboa Park, and we enjoyed delightful food and picturesque sunrises and sunsets.

I was missing the reason that I post, blog, tweet, etc. in the first place and that’s the people in my life. I learned a great lesson from that tide pool. It’s not the technology that’s a problem, it’s how I choose to use it.

I plan to take this lesson to heart from now on.