There is always some level of risk when you delve into the world of politics. I’m cool with that because this is a topic that is critical in my opinion. Now, take a deep breath before you read on. This isn’t a post that is for or against any candidate or issue. I don’t know how to do that objectively because everyone has different views, beliefs and affiliations. 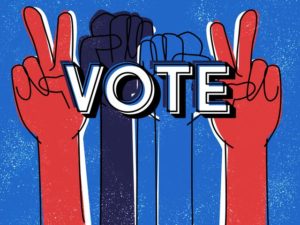 I believe in voting so much because I know the power that casting your ballot has. I’ve been able to vote over the past 30+ years and I’ve never missed the opportunity. Not once. It didn’t matter to me if the issues were “insignificant” to most. It was important to me to vote. This included ballots for local school levies (and my kids are grown), emergency services levies, local political offices to be filled, etc. My parents instilled this behavior in me, and they both have been personally active their entire life. In fact, my Mom still works the polls and she just turned 80.

There are a few observations that I do want to mention that I see as obstacles for people participating. The first is the unending negativity that comes at us from every forum, platform and form of media. You never hear what a person can do or desires to do. You only hear how horrible their opposition is. Amazing that we are asked to make choices on who is less awful. If you know me at all, I’m not a negative person and don’t understand it. It takes some time and effort to look past the barrage of crud to see where people and/or issues stand, but it’s worth it to be educated and informed.

Secondly, when people say that they “don’t have the time” I shake my head. Millions of people have no problem voting often for their favorite reality show characters on a variety of shows each week. We can make time to vote for entertainment choices, but not on candidates that may shape policy for years to come. It doesn’t make sense. I know that voting makes us drive out of our way on our normal commute, and that it doesn’t “fit” our regular schedule. However, it’s worth being put out.

I’ve seen local school levies pass by less than ten votes. I’ve seen people get into office more because people chose not to show up to the polls than to actually receive votes. I’d rather see people be active in making a choice than to see someone take office just because voting was inconvenient.

This week I encourage you to go to the polls and choose. I understand that we live in challenging, divergent and even divisive times. One thing you can do to affect this takes only a few minutes.