This past week I was in the woods at Summer Camp with my phenomenal son and 34 other scouts at Camp Frontier  in Pioneer, Ohio. Like most of the country it was as hot as the face of the sun, but my boys and adults were amazing !!  We got through the week with sore bodies and an immense amount of bug bites, but they were minimized by the lasting memories that we made together. 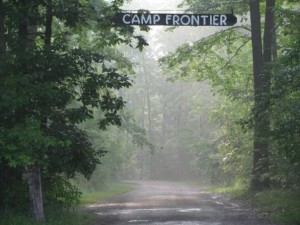 As Troop 941’s Scoutmaster, I have two expectations for Summer Camp: (1) FUN !!!!! and (2) Be engaged – both scouts and leaders.  This is never a problem for our Troop.  They jump into Summer Camp with anticipation and excitement.  Don’t get me wrong, it’s a ton of work !!  My son took three Eagle Merit Badges along with Kayaking.  That’s brutal for a schedule, trust me !!

I always believe in modeling the behavior you expect from others. So, if the boys had a tough schedule, so would I.  I volunteered to be a Camp Commissioner which meant that I got to visit and inspect other scout sites for the Baden Powell Award.  This is the award given to Troops who meet an extensive list of achievements during the week.  Our Troop has earned the award the past three years and I’m very proud of them.

It’s also a great chance to network with other adults who care about Scouting and their boys succeeding.  I also volunteered our site to host all the leaders for a social.  During the social, I practiced voodoo HR on an unsuspecting crowd by asking them all to introduce themselves and share something exceptional about their Troop.  These socials normally last 20 to 30 minutes.  They left our site after two hours !!

As my Senior Patrol Leader, Zach, and I were walking back to our site, the Program Director stopped to chat and asked how the week was going for us.  Both Zach and I shared great tales of excitement and the positive aspects of the camp.  The Director said that was great because their staff looks through the weeks and notes that some Troops are “magical” and that included 941.  We were humbled.  In fact he said, “When 941 comes to camp we know we have to step it up even more !!” My young scout leader was stunned when he heard this and said, “Mr. Browne, I didn’t even think we were making an impact.”

The second story is extremely touching to me.  One day, two adult leaders from another Troop visited myself and one of my leaders.  They had a difficult situation at their site where some older scouts were bullying a 1st year scout.  We didn’t judge or want jump to the rescue.  We just gave advice which is what they asked for.  The leaders went back to their site, talked to their boys using our advice and the young man who was leading the bullying came to them, apologized and asked how he could make things right.  The young man who was bullied had left camp, but he returned and finished the week due to these leaders learning how to model behavior vs. going back and yelling at everyone.

I could write for days about camp.  It’s a great reminder to understand that everyone impacts everyone with every interaction. So, as you go to work this next week, think about who you’re impacting.  You never know . . .