This past weekend I had the opportunity to attend the SHRM Regional Business Meeting with all of the State Council Directors from around the country.  It is one of my favorite events to attend in my role with the MAC.  It’s a fave because the group of volunteer leaders that attend this are “all in” !! They help provide direction for their State Councils as well as the SHRM HR Chapters throughout their State.

There’s real value when you’re around people who share the same experiences you are having.  This year the entire event had a positive vibe because people came wanting to have their voices heard, share their ideas and opinions with each other and the SHRM Staff, and see movement.  There was definite movement and I’m geeked to see the Society listen and act.

If you aren’t a member of SHRM, or a local chapter, and you’re in HR, you should reconsider.  Getting involved yourself is how things get better.  The more you’re engaged, the more you can share your insight, advice and experiences.

We had a great example of how being involved helps you both professionally and personally.

One of the presentations was with the SHRM Public Affairs folks about Social Media. It’s funny, but as someone who’s fairly active in social media forums, you fall into the trap that others are as involved at the same level you are.  I know that isn’t the case, but you lose sight of this.

There’s been a real wall put up by those of us in HR involved in social media pointing towards those who aren’t as active.  We’ve done one of two things – we’ve either tried to engage and embrace them, or we chide them for not being as “fully” involved as we are.  Social media should NEVER be an obstacle to HR. 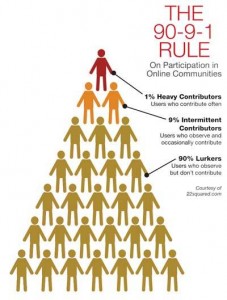 Andrew Morton, who heads up the Social Media efforts at SHRM, gave the attendees a refreshing and different perspective.  He told us about the 90-9-1 rule of social interactions in communities and forums.  It states that 90% of people on Social Media observe (lurk) as their level of involvement in social media. 9% comment (edit) the posts and content they see out on these forums and 1% create content.  He used a great video (The First Follower) to make his point.

His contention, and I absolutely agree with him, is that it’s great to be in the 99% when it comes to Social Media because you are still involved !!  You don’t have to be the 1% who creates and shares content.  It’s a misconception and shouldn’t keep you from being active in the 99%.

The video talks about the Lone Nut and his First Follower.  It shows that there’s more power in stepping out and connecting where you feel comfortable. You may always stay in the 90%.  You may move to the 9%.  And, who knows, you might be one of those lone nuts who creates and shares content !!

The key is to remember is that you ARE involved already !!  So, relish that, leverage that and make social media a part of how you engage, learn and advance HR !!

One thought on “You’re Involved !!”