Do you remember the classic cartoon The Jetsons? I loved watching this show because it was a cool version of what people thought the future would hold. One of my favorite aspects of the cartoon was the video calls that George Jetson would make with his boss Mr. Spacely. The thought that you could make a “phone call” and see the person you were talking to was unthinkable in the past. It was some fantastic idea that you could only see from someone’s imagination.

Little did I know that a video call would become a reality !! This weekend I participated in something I could have never imagined would EVER happen in my lifetime. Let me backtrack for a second . . .

This summer at the SHRM Annual Conference in Chicago I had the opportunity to speak at two mega sessions, and it was incredible for many reasons. One of the many highlights was meeting Usman Abid from Pakistan. He came to one of my sessions and then proceeded to floor me by buying 38 copies of my book HR on Purpose !! for his entire HR team. Now, fast forward back to the present . . . 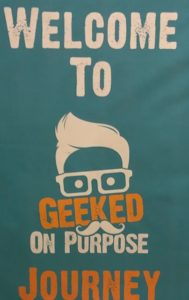 Usman sent me an email and asked if I had a minute to join him and his team for a Skype call over the weekend. He had taken my book and developed a two-day workshop based on it !! I was astonished to say the least. He came up with hashtags, themes and even shirts with double exclamation points. He also came up with this logo. The whole concept was humbling and overwhelming.

I jumped at the chance to talk to Usman and his HR team. I set up my laptop in my dining room and when the beep, beep, beep of Skype chimed, I answered and was seeing a room full of my peers on the other side of the globe. The. Other. Side. of the Globe !! It was surreal. The video call that I only knew from cartoons was now happening.

It was so fantastic to tell some stories, share some laughs and talk about a people-centric view of HR. The call lasted about fifteen minutes. I didn’t get a question, but someone did notice that I was wearing tie-dye with the #HRTribe hashtag on it. In fact, the folks in Pakistan cheered when I stood up and showed them the shirt. As we were ending our time together, I was overwhelmed with emotion as I thanked the team for the chance to be a part of their workshop through some tears.  Usman and his team said good-bye to me in Urdu which was very cool.

In my wildest dreams, I never thought that one day in my career I’d write a book. A book that would be purchased by a peer and then taken around the world. A book that would be developed into a workshop, and result in a video call between fellow HR practitioners in different global locations and time zones.

One thing to note . . . Usman’s did all of this work BEFORE anyone on his team even received their copy of the book !! They’re going to get their personalized signed copies at the end of the workshop.

I felt compelled to share this story for a couple of reasons. One – it’s amazing and overwhelming. You have no idea how much it humbles me that this has happened. Secondly, I think it’s important to remember that regardless of where we are in the world, we have common bonds as humans and as professionals.

The entire experience encourages me that there remains so much good in this world. As people, we can come together on purpose to lift each other up and do great work. Our humanity is a far greater bond than all of the distractions, anger and negativity that everyone seems to want to dwell on.

This week please remember that it only takes a minute to bring us together. I think we have the time to do that now and going forward !!