This past week I was in my element more than usual because I attended the Ohio SHRM State HR Conference. I was able to be surrounded by my peers as well as a constant vibe of music, tie dye, lava lamps and harmony. Yes, I know that sounds like serious hippie lingo, but I felt right at home. 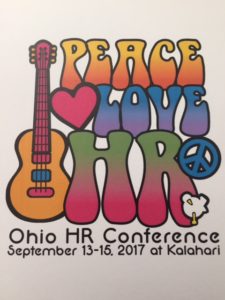 If you haven’t been to State SHRM conferences, you should check them out. They have a more intimate feel to them and you can take time to genuinely connect with people. Yes, they are full of events, excitement and phenomenal sessions of HR content, but they have a more relaxed pace to them.

Two speakers completely captured my attention because of their personal story in approaching business. We heard from Jerry Greenfield, co-founder of Ben & Jerry’s and John Jacobs, co-founder of Life is Good. So much of what they had to share really stuck with me both emotionally and logically. In today’s frenetic pace and ever-changing work environment, these two companies have made sure that they ran their enterprises from a values-based perspective. These aren’t the “values” that corporations dream up during their annual strategic planning exercise. Both companies have deep held beliefs that they will not sway from as humans that shape their culture and their impact throughout the world.

It was so reassuring to see this, but this approach is rarely followed. The “value” that is espoused and held to more than any other today is profit.

(I can already sense your eye roll and concern that I’m going down the hippie path – and I’m good with that !!)

I understand, and agree, that companies need to be profitable in order to survive. I get the economics of it. However, if there isn’t a higher calling to having an organization, it can’t sustain itself. It’s great to see more and more small businesses and those making up the Gig Economy are changing the rules of work. It’s also reassuring the businesses are finally starting to realize that they are nothing without their people.

Please note that this has ALWAYS been the case, but we’ve spent centuries trying to prove it out as something else. There are still holdouts that will contend that structure, processes and systems are the real backbone of successful companies. Those elements are needed, but they mean nothing without people.

Both Jerry and John shared stories about humans and how those shaped who they were and how they were able to succeed. They stuck to their unconventional approach while holding to the beliefs that (1) social responsibility is an obligation and not a feel good philanthropy effort and (2) optimism always outshines negativity !! 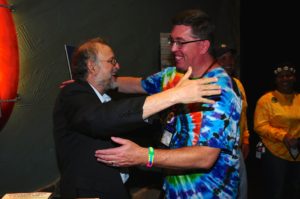 I knew I was among my brethren when I met them. Jerry doesn’t shake hands, he hugs. Perfect. John started his session by saying “The best way to kick off a presentation is to throw stuff into the crowd !!” and he tossed Life is Good frisbees into the masses. He also closed his speech by having a group of attendees join him on stage to play Beatles tunes on kazoo while the rest of us sang along !!

Being genuine in business shouldn’t be an exception. It should be the norm. I’m thankful for the reminder and will remember to practice this every day on purpose !!

Last week I attended the Ohio SHRM State Conference which has been a staple of my professional development for several years. I enjoy it because I get to hang out with some of the most engaged HR professionals that I know from all over the State. I’ve seen some friends who come year after year, but I also was able to meet a ton of new HR pros which were attending the conference for the first time.

The location of the event always lends to the feel of the Conference and Kalahari Resorts located in the rural outskirts of Sandusky, Ohio is just perfect !! The African motif, the spacious halls, the INCREDIBLE staff and the subtle touches of art, décor and music keep the theme together. You completely forget your office and melt into the resort. It clears your head and allows you to take in the sessions, the vendor hall and the chances to network.

I learned something new, or received a fresh reminder, from every session !! The programming was spectacular from the opening session to the early birds to the closing keynote. I noticed something that occurred throughout the entire conference, and especially after sessions. I listened to attendees and the question that was asked almost instantly was whether they “liked” the speaker or not. It was true for every speaker.

I understand this question because I’ve asked it myself often. What doesn’t make sense to me though is that we rely more on judgment and opinion instead of content. If a speaker is liked, then he or she smart and had something to offer. If a speaker isn’t liked, then whatever they shared wasn’t good. The more I look at it, we could miss many resources just because of delivery.

What if we tried to look at things from a different filter? Instead of asking whether we like or dislike a presentation, we ask – what did you notice?

I’ve been trying to do this over the past few years and I’ve come up with something I’ve noticed as a professional in HR.

This feeling was confirmed when I heard this theme showing up over and over throughout this year’s Ohio SHRM Conference. It’s time for HR to come to terms with “who we are” because it affects “what we do” and not the other way around. I was geeked to hear so many speakers talk about the positive impact of HR in organizations, in individual roles and especially in the lives and performance of employees. There was VERY little talk that tore down HR, and this was honestly refreshing. It seems the tide is turning, and the next step is coming to terms with our identity.

The shift in focus that you can use in looking at conference presentations needs to occur in your role and throughout your company. Whether we are liked or disliked isn’t important. I know that it matters personally because no one wants to be disliked. However, we need to get people to notice who we are first. This can happen only one way. We need to be authentic and genuine. I can’t define how that looks for you, but I know that’s what people seek.

Too often we see people who put up a façade in order to be liked. It’s not what’s needed. The mold has to be broken and it’s personally up to you to make that happen. You can’t preach it to others and not model it yourself.

This week strip away the function of what you do and start being who you are first and foremost. It would really make a difference to everyone !! Try it and see !!