College is a time when you “grow up.” It was my first time away from home for any extended period of time and I was the only person from my town to attend Ohio University. I went there not knowing a single person. Now, you need to know that I graduated in a high school class of 73 people, and just joined a university that had 17,000 people attending at that time !! I suffered a major culture shock, but fell in love with everything the school had to offer. 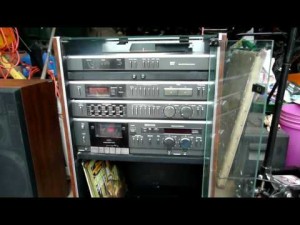 My sophomore year, I became a Resident Assistant (an RA). I was practicing HR even back then but didn’t know it. As an RA, you get a single room which meant you had a room that normally held two students all to yourself. I saved up money and purchased a JC Penney MCS Stereo System !!

It “looked” cool, but it wasn’t. Several students in the dorm had massive stereo systems with components, equalizers, woofers, etc. They could shake the building when they were turned on. Almost every day you could hear the low hum of systems just waiting to blast out music.

I started my album collection in college and EVERY Friday I would come back from classes and a full week and pull out an EP to play this song . . .

Almost everyone has a band that they can say defined their generation and U2 is that band for me. I know that they are a group that people either adore or don’t. There really isn’t a middle ground.

I saw this song performed on a HBO special in the dorm late one night from one of their concerts and I was transfixed. I had never seen someone sing so passionately. Bono was dripping in sweat and the crowd hung on every word he sang. The Edge played the guitar in a way I had never heard before and Larry Mullen Jr. and Adam Clayton provided the solid drums and bass to keep things incredibly tight.

After a full week it felt cleansing to pull this EP out of it’s sleeve and gently put the vinyl on my stereo. I played it so incredibly loud that I could hear nothing else. As the RA, I was supposed to keep things “in line”, but I wasn’t much of a rule follower even back then. I saw U2 as a group that was changing music and I saw myself in them because I too was changing and wanted to see things change even more.

I would absolutely love to meet the band someday (another bucket list item). I continue to love everything they do, and my interest in them only grew from the time I had this EP. After I served as the chair of the Ohio SHRM State Conference, the committee was gracious enough to get me a signed copy of their Joshua Tree album. I’d like to think that I’d thank them for providing that release every Friday.

In fact, I think I’ll go dust off that EP and slap it on my turntable once again . . .