Over the weekend I was channel surfing (because I don’t have Netflix – no one pass out) to see if something would pop up, and I came upon one of my all-time favorite films, Forrest Gump. I stopped at the point in the film when Forrest is in Vietnam and he runs back into the jungle many times to save his best buddy Bubba, and ends up saving many of the men in his platoon.  My skeptical 17 year-old son wanted to me to change the channel, but I asked to let me see just this one scene.  He was hooked and we ended up watching the rest of the movie.

I love the movie because Forrest has such a fresh outlook on life and it made me think that we could take many lessons from the film as we practice HR.

When I’m around most of my HR friends, I hear them bemoan how difficult EVERYONE is to deal with – when it’s actually only a few people.  I also hear people try to one up others with tales of employee misconduct.  The stories that are more shocking and/or vulgar seem to gather crowds !!

I don’t think living in an environment of constant truth or dare scenarios helps us personally or professionally.  If we only see the bad things around us, or the flaws and negative characteristics of others, how can we ever hope to move an organization forward?  It’s no wonder people cast a negative light on HR when all they hear are HR horror stories. 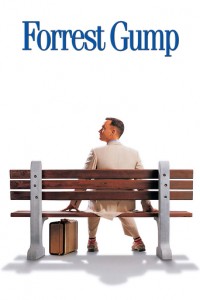 What if we saw life as Forrest did?  Sure, the movie is filled with a character who “happens” to experience almost every single major historical event in the U,S, personally, but it’s a movie.  If you notice, Forrest isn’t swayed by his good fortune, his fame, or his run ins with Presidents or other famous people.  He takes it in stride.  This is also true when the dips in life hit him and he experiences loss of his mother and his beloved Jenny.

We come across opportunities every day to interact with great people.  What’s our mindset when we’re about to meet with them?  Are we burdened by it?  Do we think the worst is sure to happen even before we talk to anyone?  Do we jump to extremes and make broad-based decisions, policies and procedures because the interaction we just had should become the law of the land for all people going forward (even though it was an exception to how work usually goes)?

Forrest is unflappable.  The only time he struggled with his situation was when Jenny introduces him to his son and Forrest worries if his son is smart or not. I think that he would have loved him either way, but it was obvious he didn’t want his son to face the same challenges he did in how people saw him as stupid – or less than others who were “normal.”  He always responded “Stupid is as stupid does.”

Think about it becoming HR is as HR does.  Forrest always let his actions show his intent and genuine approach toward life.  We should do the same.  HR’s behavior needs to be unflappable and able to not only take life in stride, but enjoy it because we never know what the next step will be.

Forrest thought his life turned out exactly like it should have.  It was filled with extraordinary adventures which he thought were just normal situations.  He wasn’t fazed.  It’s a fabulous approach each day and something I’d encourage each of you to try !!  Every person we meet may be an incredible adventure just waiting to happen.  Don’t miss it !!

“And that’s all I have to say about that.”