Father’s Day is a wonderful time filled with a mix of emotions. It’s a day to be thankful and fondly recall my two dads. My biological father, John, passed away when I was four years old. I don’t have a ton of memories of him, but my extended family has told me we have the same walk, same loud laugh, and the same dose of extroversion. My dad never met a stranger. He would make quick friendships at every turn. It served him well as a Seargent who served in Vietnam because he was always focused on his men instead of himself.

My mom remarried when I was 13 years old to my second dad, Don. It wasn’t easy for him to jump into a family with two teenage boys. However, he made it work. He was a glorious example of work ethic, serving others and the community you lived in. He was always the wittiest person in the room, and he taught me countless lessons on how to be a consistent husband and father. He passed away at the end of 2020 and I miss him daily.

My “kids” are now adults. They are out on their own and I couldn’t be more proud of them. They are finding their way in life, their careers, and their relationships. We are having real conversations about every topic possible and I love seeing them continue to grow and develop. There have even been a few times where they’ve asked my advice !! I nearly fainted the first time it happened and cherished it at the same time. Making the transition where we are now has been the best stage of fatherhood yet.

I know I have been fortunate with my two dads. Trust me. We have had our ups and downs and disagreements. I’ve had the same with my kids. But that’s honestly just life. Life happens and I wouldn’t change a moment. My two dads were with me through all the facets of my life and I plan to be there for my kids for as long as I’m on this planet.

I’m not sure what the future will hold for me, my wife, or my kids. I hope that one day they have fond memories of their dad and share the experiences they had with me over the years.

For everyone who is a fellow dad – Happy Father’s Day !!

It’s quite an adventure. An adventure worth taking.

I am very fortunate to be a father. I mean that. This is something that I wanted to become at some point in my life. I am also very fortunate to have grown up surrounded by an extended family where I saw strong fatherhood models both from their personal example and how they loved their spouse and their children.

In today’s society, fatherhood has a tarnished image. Most of this is honestly earned because of those who haven’t been able to be a model father. Please note that this post isn’t in any way meant to exemplify one father versus another. Parenting is not easy. It never has been. No one gives you an “owners manual” once you are blessed to be able to have children in your family.

Most dads I know have followed the example of being men who work hard and often too long. They are trying to provide for their families, but their extended hours often eat into time that could have been spent with their kids. Kids may not understand the sacrifice that is being made while it is happening, but I hope they do see it as they grow older.

My wife and I have two kids who are now adults. As I type this, I’m being a “dad” who is off at a conference for HR which is my chosen profession. I will be out of town and away from them on Father’s Day. My entire family is incredibly supportive of me professionally, and they always have been. Now, get ready for an amazing story . . .

Outside of our house we had a dwarf evergreen in our front flowerbed. It was there when we moved in back in 1991. We enjoyed it as part of our landscaping and gave us some “curb appeal.” I was told by a friend who is a landscaper that it would never grow much because of the type of evergreen it was. He was wrong.

This small tree grew more and more every year. The tree became a prime background for family pictures. My wife and I stood in front of it as did my parents and friends who visited. It also was a great tree to decorate with lights every Christmas season and when the snow fell on it with the lights twinkling through, it was beautiful.

When our daughter Melanie was born, we took pictures of the three of us in front of the tree. As our son Josh came along we now had a family of four and the tree had grown along with our family. The biggest tradition we had was taking the kids picture in front of the pine on the first day of school each year. We did this from Kindergarten through their Senior year in High School. As the kids grew, so did the tree. They were never taller than the pine that wouldn’t grow, and we had to use a step ladder to get lights all the way to the top each year after awhile.

Recently, the tree began to die and become browned and brittle. We decided just this Spring to take it down. It was an emotional day because of so many memories.

As I settled in my room and began to unpack my clothes and get ready for the conference, I saw three envelopes with cards and a small white bag with green tissue paper covering some odd shapes. The cards were for Father’s Day. As I opened them, tears streamed down my face. The cards were hilarious and filled with handwritten notes that made me laugh through my tears. I then pulled out the tissue paper and unwrapped it to find this . . . 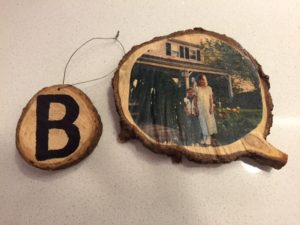 My “adults” had taken the trunk of the pine and cut two sections off to make this as my Father’s Day present. The ornament is our family initial for “Browne” and the other is a picture of them in front of the tree at Easter. Speechless.

This Father’s Day hug a Dad. The majority of them are doing the best they can. Yes, they work hard and put in long hours. They all hope that over the years they have planted seeds in their kids to leave a legacy and some deep roots of faith and family. They’re the tree that is the background of their family’s pictures.

Happy Father’s Day to one and all !!