This may seem like an overly obvious statement. However, I don’t think we believe it because we are extremely careless with our words – especially when it comes to people.

It’s so easy to get frustrated with how others treat you, or the situations you find yourself in. Words that describe your immediate feeling and reaction usually aren’t positive. And, if we’re honest, we feel “better” by taking a shot at someone else – at least for the moment. I think we do it so often that we’ve become desensitized to how we casually describe others. It has become an expected response . . . and that is sad.

Now, trust me, I’m not pointing fingers at others because this is something that I struggle with as well. It’s not something I’m proud of, and it’s actually something I’m trying to turn around.

People don’t deserve to be called names that belittle or degrade. No one. Ironically, most of this happens out of earshot of the person we’re frustrated with which makes it even more underhanded. On top of this, we unfortunately highlight name calling and labeling almost incessantly in our social media forums or in the news. The juicier, or more vicious, the better. The response to when these barbs are thrown about is to take it up a level so it gets more and more harsh. I want you to note something.

Tearing someone down has NEVER improved a situation or a circumstance. Not once.

I mentioned before that I’m working on this. That’s the truth. I don’t mean this as an HR professional. I mean this as someone who’s a husband, a father, a friend, a volunteer and a co-worker. I observe that the ease at which others are torn down is the norm, and I can’t accept that. I understand people can be frustrating. However, what I think gets completely glossed over is that we’re ALL people !! I have to be someone who frustrates others. So, is the same name calling being used towards me when I push someone’s buttons? Of course it is. Even if I don’t hear it directly.

I had a conversation recently with a friend, and we were letting off some steam about a person who wasn’t in the conversation. It wasn’t positive. I’m embarrassed to say that. Afterwards, I decided that this isn’t how I want to behave. It’s an easy excuse to justify venting, but it isn’t how I want to see others treated, or be treated myself. 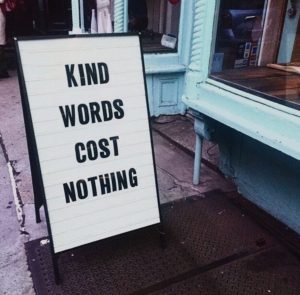 I believe we can, and should, be encouragers of people. This doesn’t count just for people we like. It’s for everyone because it honestly doesn’t happen enough. I know that when a kind word is given that is has meaning and impact. It matters. Now, it may be the exception in what people hear, but that means that kind words should be used even more regularly !!

We will all still be critical and there is value in that. We should be critical of the behavior we see and experience and not the person. Most people reading this will not agree with this position because it takes effort and grace to not bundle the human in our response.

This week I’m asking you to join me in changing the tide. Take time to encourage people and lift them up. When you’re faced with the urge to lash out, don’t do it. Breathe and then assess what was said. See how to respond positively and then act. It’s not what we’re used to doing in our interactions with others. What’s cool though is that people won’t be expecting a positive response either.

What we say matters. I choose to encourage and I hope you will as well !!