One summer while I was in high school, I worked as a counselor at an Easter Seals camp for disabled adults.  Going to this camp genuinely changed my perspective on life !!  I entered the camp a bit freaked out honestly.  Everyone around me was vastly different that me, and what I was “used to.”  People in wheelchairs.  People who couldn’t speak clearly.  People who couldn’t feed themselves, or pretty much care for themselves on their own.

Remember, I was a teenager.  Arrogant, self-assured, indestructible, etc.  This was too much for me. The adult who had asked me to work was a counselor I had a Church Camp for years.  He was a mentor and knew me better than I knew myself.  The first night at camp, I cried myself to sleep because of the challenged people and my inability to accept them.

The first full day of camp, Duane (my mentor), asked me to sit in a wheelchair and he tied my left hand (I’m left handed) to the arm of the chair.  He then told me that I was teaching art class all day for campers, but wouldn’t be allowed to leave my chair.  I had to eat all of my meals, use the restroom and live the life of the campers.  I didn’t handle it well !!  I was frustrated at how limited I found myself.  Duane had told the campers to really push me – and they did with fervor !!

As the day came to a close, one of the campers, Bill, who had severe cerebral palsy and “spoke” with a rudimentary computer, pulled me aside.  He said something that changed me forever.  He said, “Steve, don’t be frustrated.  We ALL have disabilities !!  Some are just more visible than others.” 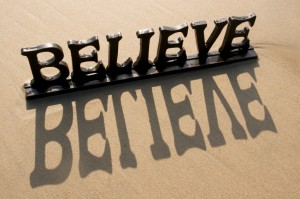 This past week I was honored enough to be a part of Disability Awareness Day at the Statehouse in Columbus, Ohio.  One of our LaRosa’s Team Members, Mark, was going to speak about being able to work and be independent.  Mark was born without arms and he is one of our Customer Service Representatives and has been with us for 7+ years.  As he came to the podium and microphone, he boldly spoke of his work and how he loves taking people’s orders so they can enjoy our great food. He doesn’t view himself as being different.  He knows he is a person who is able !!

The room was at capacity and was filled with people whose disabilities were “more visible than others.”  They cheered for Mark when he finished and a person in a wheelchair gave me a high five as I came off the stage as well.  The great people on this day reminded me that we need to believe in ALL people !!  Everyone at the rally felt you were included and not separate.  We all came together – as it should be.

So, this week make sure to change your perspective on people from now on.  Everyone has value and a life worth living to its fullest extent.  Don’t pass someone over, or avoid them because of their appearance.  Instead, reach out and let them know that you believe in them.  It will change your life as it has mine.