You know you’ve said this.  You may have even said it today to start the work week !!  We wish others would just “get it” because we sure know that WE do !!  I’m serious.  We want others to just know what to do because we’ve covered it over and over and over (or so we tell ourselves.)

This approach isn’t just true at work.  We want others to know how to do things because we told them to do it at home, in our civic activities, at church, at school – almost any environment has the issue of “assumed culture.”  This is when the people who have been around for some time assume that others get what to do through some form of mystical symbiosis, and then we get upset when they don’t do things right.

People, more than ever, are frustrated in their jobs and with their companies.  As an HR person, I hear this frustration coming from the C-Suite down to the front line on a daily basis.  Almost every day I can place the shared frustrations to assumed culture.  You see, we strive to make people conform because we feel that if everyone is pretty much the same, then things will go more smoothly.

However, this just isn’t the case.  I don’t know if there are things such as HR “formulas”, but if their were, I would have one that goes like this:

This weekend my Boy Scout Troop camped near Old Man’s Cave in Logan, Ohio in the Hocking Hills State Forest.  One of the natural formations is called the Devil’s Bathtub. 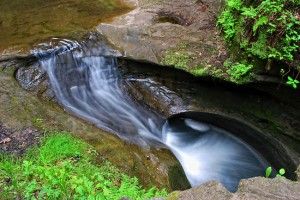 The waterflow of the river that goes through the park rushes rapidly toward this formation and the water’s force has cut it into the constantly swirling whirlpool until it forces the water out this small opening several feet under the opening.  This is very reminiscent of how your employees feel when they are told they should “just know how to” do things.

This week take a new approach.  TEACH don’t TELL.  It may be frustrating to cover the same things more than once, but teaching people what to do and how the assumed culture works at your organization will make them better performing team members.  The time it takes is far more rewarding than building the frustration that eats at you !!  Try it out and let me know what happens . . .