I don’t know if many people were as excited as I was about some music news this week, but I was Geeked !! Rock giants, AC/DC, released their seventeenth album called Rock or Bust.  I’ve heard a few tracks and it sounds much like their whole catalog.

You may not be a fan of these Metal legends, but I found myself immersed in them because the Classic Rock station on Sirius XM was “taken over” as AC/DC radio.  Members of the band shared their past experiences and their excitement over their new work.

AC/DC is one of those bands who people have been critical about because they follow a simple three chord method to their songs.  It’s true that their songs don’t have a ton of musical variety, but they have released songs that will be played for generations to come.

So, what does this shout-out to one of my fave bands have to do with HR ??  Everything, but it takes you looking at something that is missing and how this can fix it !!

I continue to come across HR people who are in transition.  I am surprised that the first time I meet them is when they are looking for a job.  It is disappointing because I have this crazy goal that I want to be connected with as many HR people as I can.  I don’t want to see anyone who isn’t a part of a greater HR community.

I don’t understand it.  I don’t understand how you can be in HR and not be intentionally connected to others in our field.  These connections are so much more than a method to find another HR gig.  They result in strong, life-long relationships filled with resources and knowledge that you can’t get on your own.  It’s just not possible. 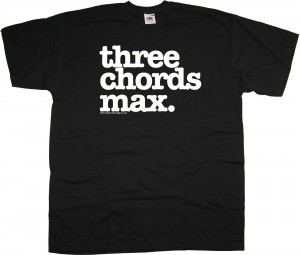 I don’t feel that everyone should try to have as many contacts as someone else, but you should have three !!  You see, I believe in the power of mentoring.  I don’t follow the definition that you find in many HR circles stating that you set up a mentoring relationships for a set period of time and then it should fade away.  I think that this approach often turns out one sided and focuses on someone’s specific need instead of looking at the whole.

So, here’s the model I do follow !! You can’t have a mentor unless you mentor someone yourself.  The three “chord” model makes sure that you are giving as well as learning from someone else.

I also feel that you should seek out these triads intentionally.  I have a few mentors who I’ve been with for decades and I have a few mentees who have been with me for many years as well.  I also make sure that the relationships are as deep as needed.  The mentor/mentee relationships I have vary from somewhat more on the surface to others that know no end to their depth !!

In fact, I just reached out to a friend to ask if I could have him be a mentor and work with him in 2015.  His response was awesome – “color me intrigued and honored.”  I’m excited to see where it goes.

So, I ask you to join me and set up your trio of connections !!  Remember it only takes three chords to make a band !!  To get you started, I leave you with this . . . (you’re welcome.)