One of the coolest outcomes of being involved in social media is meeting the folks behind their avatars.  The vast majority of folks I’ve met rock and the “connection” we had on-line has turned into friendships that have relevance and meaning. Today we are celebrating one of my dearest friendships that came from the various forums, and that is with Paul Hebert.  Last year a tradition of #TimSackettDay was started for the inimitable Tim Sackett. To have it be #PaulHebertDay this year is just as cool !!

Paul reached out one day when I mentioned that the HR Roundtable that I facilitate in Cincinnati was going to be on Incentives and Recognition.  For those of you who don’t yet know Paul – he is THE go to resource in this area in the country !!  (Not an embellishment.  It’s a fact !!)  He wanted to Skype in or call in to be part of the discussion.  I said that I hadn’t had that type of request before because it’s better as a live forum.  He asked when it was happening.  I told him and he said, ” I’ll be there !! ”

Now, the commute from Greenville, South Carolina to Cincinnati, Ohio takes a bit of time – say 6 1/2 hours or so.  He gets the prize for longest distance traveled to be at a Roundtable to date !!  When he popped out of the car, I ran to hug him because that’s what I do when I see a friend.  He was a bit taken aback for a sec, but he knew it was what brothers do.

First time we met in person.  First, now of many !!  We saw each other at HRevolution in Atlanta, SHRM National 2012, Ohio SHRM (where he rocked it as a speaker) and most recently at GCHRA in Cincinnati.  We always make time to catch up, share ideas and most importantly challenge each other !!

You see, I dig Paul because he’s very intentional about life – as am I.   I think that’s one of the key elements that ties us together.  Most people shy away from folks who are fully intentional, but not Paul.  He is always willing to mold thoughts, give various perspectives and hone our conversations.  I don’t get mad about this.  I CHERISH IT !!

He’s facing a serious health issue right now, and true to nature, he put up a blog to share about his experience and I love it.  In spite of the blog, I call him because talking to him is more intentional and that is what we’ve come to expect from each other.

He’s pulling through this challenge and then he’s launching into his new business relationship with Symbolist. I’m geeked for him and for the great work that is going to come from this partnership !!

When Paul wrote about coming to Cincy for the HR Roundtable, he used the Proclaimers fab one-hit wonder – I’m Gonna Be (500 Miles).  In the lyrics they state how the person would be there for his friend no matter what.  That’s what #PaulHebertDay is to me.

I will be there for him no matter what !!

Make sure you get to know Paul.  You’re life will be more intentional and only brighter because of it !!

Did the title grab your attention?  Hope so because last week I had two very cool things happen !!  I received two surprises that solidified my contention that we have to quit talking about the “echo chamber” of HR folks in social media. 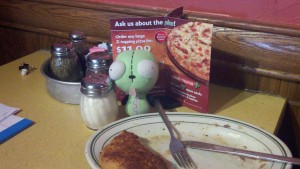 The first event was the arrival of Gir – the constant companion of Shauna Moerke (the HR Minion). Gir has been around many different HR Conferences and events.  When Shauna asked if anyone would like Gir visit, I couldn’t pass up the chance for him to experience LaRosa’s. We visited one of our locations to have a calzone.  I actually took Gir with two of my staff and when I said that he was joining us, they said, “Of course he is.”  I guess working with me for awhile, they have come to understand that I look at HR differently.

After a great meal, we came back to my office to find the second cool gift of the week.  I received a mix CD from David Kovacovich from Michael C. Fina.  It is an incredible mix of newer Indie music.  David told me he made it because I write a song each week that makes fun of HR on the HR Net.  I tend to parody more of the Classic Rock genre and David wanted to make sure my tastes stayed current as well.  To capture the moment, I took a picture of Gir with the mix CD (songs handwritten on the back) with some of the decorum from my office. 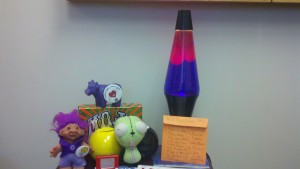 The reason I find these two events so cool is that we tend to think of people who are active in Social Media as HR pros as either avatars or people that exist electronically.  It is so far from the truth !!

We have to realize that first and foremost, we want to have true connections in our lives.  This isn’t a “brand” thing or a response to people who choose to have an on-line persona that doesn’t match them in real life.  Reaching out like this just shows how we still like to share things that matter with others.  It reminds us that we can always stay young at heart and do simple things that matter.

This week, I’m writing to those who are also active in the “echo chamber.”  Two things to leave you with.  (1) Reach out to others and make the connection to show others how amazing you really are !! and (2) The chamber will only expand and someday include all HR pros only if you wish to become connections and not personalities.

I’ve been fortunate to meet many of the voices who are truly moving HR forward and they rock !!  Reach out this week.  Take the action to do something cool.  It still matters.  I need to go know as Gir and I listen to Track 3 on my new CD from Noah & the Whale.