The 2014 Winter Olympics are in full swing, and I have to tell you that I’m a fan.  It’s a chance for the entire world to come together for a common purpose through sports.  I’m not a skier, skater, bobsledder, luger or curler.  Although, I think being on the US Curling Team would rock !!

With all of the pomp and circumstance, bright colors and international community comes an unfortunate dark side.  It is truly almost unbearable to listen to the blathering commentators.  During the opening ceremony, one of the visual special effects where snowflakes were supposed to transform into the five Olympic rings failed.  It caused a global uproar and Twitter exploded !!  In fact there’s an account on Twitter that focuses on the things in Sochi which are “wrong.”

The negativity doesn’t stop with the talking heads of NBC in their studios, during the Today Show or the Evening News.  It continues during EACH event !!  We’ve never been a country who admires that other countries actually send athletes who also compete alongside us.  The coverage is so U.S.-centric that we only get to see an extremely small portion of the actual competition even though it’s hours and hours of TV coverage.  Then, during the coverage, the analysts talk about all of the errors people make instead of focusing on how amazing it is that this athlete is representing an entire country !!

I get sick of it.  Ironically, it reminds me of how the majority of HR is focused.  Entire company cultures go to work each day to focus on “what’s wrong” with work and especially with their employees.  I know I’ve been guilty of this because it’s so much easier to be negative vs. being positive !!  It has to stop. 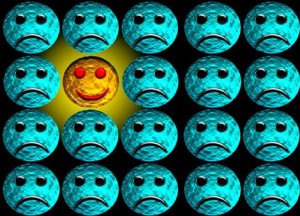 Just think what would happen if your culture refused to be negative !!  I understand that there are challenges in every workplace.  But those are opportunities, not obstacles.  HR should make it there mantra that ALL systems that touch, or affect, people in the organization should be intended to encourage, develop or address folks where they are.

If someone is lacking a skill, then take the time to teach them what they need.  If someone is struggling with a person/boss/management, talk to them directly without having the approach of “making a case.”  If there are differences between people or departments, be the glue who connects the dots and show how to integrate people’s strengths instead of harping on people’s differences.

I could fill an entire post on these types of if/then statements.  The key is that we need to be more like Sage Kotsenburg who won the Olympics 1st gold medal of the games and the first in his inaugural event.  He was stoked about his performance and his press conference is a great mixture of awe, excitement and “dudeness.”

He only focuses on what he was able to do and how cool it was to do it !!  If we in HR, were like this and could be positive and excited about what we did, just think of the possibilities !!  Turn off the negative and see what happens.  I think you’ll be geeked !!