This week one of my musical heroes passed away. Neil Peart was the drummer and lyricist of the legendary progressive rock band Rush. Whenever you admit that you’re a fan of Rush, you get mixed reactions. There are those who are die hard fans, and then there are those on the exact opposite side of the spectrum. There is very little middle ground. I’m cool with that. I’m on the die hard side. In fact, there are a group of my HR compatriots who post a Rush tune every week as part of #RushSaturday on Twitter. We have been posting well known hits, deep cuts and covers from popular artists as well as local acts.

The great thing about music, like any art form, generates emotion. It should. I love having discussions and disagreements about music. I’m sure there are many acts and genres I enjoy that others do not and vice versa. If music brings forth passion, then you’ve made a genuine connection. I am passionate about the entire catalog Rush has produced. Every song.

One of the amazing attributes of Neil Peart was his anonymity. That is almost unheard of in the rock and roll world. You find most people who become musicians in rock band seek notoriety, fame and especially visibility. There are countless stories of rock stars who live very public lives often riddled with bad choices. Peart was the complete opposite of the stereotypical rock star throughout his entire career. I admire that.

He was an accomplished author of several books, and he and his band mates were finally elected to the Rock n’ Roll Hall of Fame in 2013 which was 45 years after Rush had formed. You never heard him complain about not being recognized with accolades. He was about his music. For him, his work was his art. Many consider him one of the greatest, if not THE greatest, rock drummer of all time.

Peart’s example of allowing his work to do the talking for who he was, in part, is something that is worth emulating. When I think about those whom I look up to in the world of work are similar to this rock legend. They are artists in what they do on a daily basis who rarely call attention to themselves. They appreciate acknowledgement of their contributions, but they aren’t seeking to be someone in the spotlight. Organizations are filled with reliable, consistent performers who make their work seem effortless. At the same time, people go to these reliable folks because they are known for their phenomenal work.

Too often, companies look to the bright and shiny employees because they call for attention. In fact, you’ll hear about making sure that focus is placed on “high potentials” (or hi-pos). I despise this term and this approach. It is laden with favoritism and an unbalanced sense of those who are politically astute because they spend much of their time trying to take the stage whenever possible. I understand that there are people who exhibit stronger performance and even show genuine leadership capabilities. I would venture to bet though that the ones who will be truly successful are the ones who are genuine, humble and seem to make their efforts . . . reliable first.

It’s time we make sure that we are cognizant of ALL of our employees !! We are surrounded by people who make their work art on a daily basis. When you step back to do this, you’ll find that they have been worthy of your attention because of how they approach their work. These artists seek to contribute, add value and let their work speak for itself.

This week, broaden your vision and notice your people on purpose. You’ll see that they’ve been making beautiful music every day !!

RIP Neil Peart. I’m grateful for you, your music and how you shared your gift.

This past weekend I was in Chicago for a combination of events. First of all, I was a speaker at the HR Conference for Legal Professionals through ALA. Secondly, I was also celebrating my 28th wedding anniversary with my amazing wife !! We’ve been in Chicago several times and it is one of our favorite cities to visit. We’ve arrived in a different phase in our lives because we like to see sites that are off the beaten path that others may overlook for the big (traditional) attractions.

This time we decided to take in art. We did a walking tour to see the gigantic sculptures from Picasso, Chagall, Calder, Kapoor and Dubuffet. Those are hard to miss. We also went to the ground floor of Macy’s (the old Marshall Field store) to see the Victorian Age stained glass panels. We stumbled upon the Chicago Cultural Center and ended up taking a tour of the building as well as enjoy the Architectural Biennial exhibit going on. We took one more adventure to see the Museum of Contemporary Art – Chicago. At the MCA, we met Ray who was a docent at the museum. He was going to give us a tour of the 50th anniversary exhibition entitled “We Are Here.”

Now, I don’t know if you’re into art or not, but I’m a fan. My wife is learning, but is a bit more skeptical about some items classified as “art.” That’s probably how many folks feel, and Ray even noted that because we tend to think we could splash paint on a canvas. The tour he gave took an hour through one room of the museum. One room. It was spectacular !! He described the nuances of pieces that I would have normally passed by with disinterest or disdain. 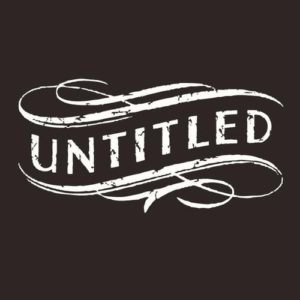 As he was leading our group through the exhibit, he stopped and said something that really stuck with me. He pointed out an abstract piece hanging on the wall and said, “Do you know why many art pieces are called ‘Untitled’?” We all shook our heads and no one offered an answer. He then said, “The artist does this because it allows YOU to see it however you’d like. There’s no right or wrong. It’s whatever you want it to be according to your interpretation.”

After he said this, I began to look at each piece of art with an appreciation. There are still pieces I don’t comprehend, but that’s on me and not the artist for creating it. I actually found myself enjoying the separate pieces more, and took time to look more intently at them to think about what I could take in. I even began to speculate more than one possible explanation about paintings and sculptures.

It made me think about how I approach people both in HR and in general. People are truly works of art themselves !! Too often we want to “title” them with some label or stereotype so we can better frame them within our point of view. When people don’t fit those labels we dismiss them or ignore them because we can’t fully make them fit into our perspective.

From now on I challenge you to see people as “untitled.” People who are mysterious, unknown, creative, intelligent and full of idiosyncrasies and nuances. People weren’t created to fit. They were created to add to the experience and existence of others. Just. Like. Art.

Drop the titles and start enjoying the uniqueness of the people in your life. I assure you that you will start appreciating folks for who they are, and not who you think they should be.

This past week I was fortunate enough to be on vacation in Clearwater Beach, Florida with my family.  We’re a close family that tries to explore the areas we go to.  We’re not the sit on the beach for 7 days group.

One of the things that my wife and kids “tolerate” is my art fix.  You see, I love to see art of all kinds.  I need to get a fix when we go on vacation just to refuel creative juices.  I love to see how others express themselves and am fairly open to most types of art.  We spent one day in beautiful St. Petersburg which has a very cool art vibe to it.  After exploring local artist shops, we went to a mecca . . . at least for me. The Dali Museum !!

Salvador Dali was his own person (to say the least).  It was so cool to walk through the museum to see that he started out “normally” to learn from the contemporaries of his day and used a more traditional style.  This changed as he aged and he found his own voice.  Listening to the walking tour, you found out that Dali’s extremely different surreal paintings were his attempt to capture what people’s dreams really looked like.  His images are vibrant, intricate, deep in meaning and disturbing at times. 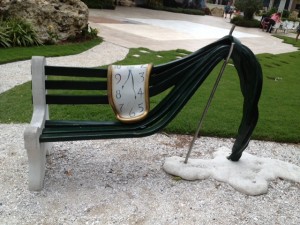 If you haven’t looked into Dali’s work, you should.  I’m sure you’d recognize his work and images.

As odd as it may sound, I saw HR all throughout the Dali museum.  In fact, I dig the fact that he was so radically intentional in what he did, what he painted and how he lived.  He also tried to express the innermost thoughts and images of himself and others.

In our field, we hear the thoughts and feelings of people every single day.  The question is – do you take the time to delve into the layers of these encounters, or are you just placating people to get them to “move on” ??  People are like art.  They deserve to be observed, examined and enjoyed.  They may not always fit your taste, but they all have value to offer.  They shouldn’t be skipped over to get to the “more attractive” or “more well known” piece.

Like Dali’s work, people are also fluid, unpredictable, layered and unconventional.  That’s what makes them amazing !!  The key to understanding this approach though is to be like Dali – intentional !!  You don’t have to go with the flow in your organization, or in HR !!  Going against the flow is much more freeing and gives you a perspective that others who just going the same direction never see.

So, this week look at the palette around you that make up the canvas of your corner of the HR universe.  Put your touch on it and bend it, shape it, crinkle it and make it shine.  Release your inner Dali !!