I know this isn’t the traditional way to start an HR blog, but I’m a Cincinnati Bengals fan. I have been for decades. The last time they were this good was just after I moved to the Cincinnati area in 1986 !! Sure, we’ve had a few years where we made the NFL playoffs since then, but there hasn’t been this type of excitement for 30+ years !!

To be a Bengals fan is to be someone who has known long-suffering. For years, you’d watch games on TV and listen to the broadcasters talk primarily about the other team. They’d list the multiple years the team never won a prime time game. Or, they’d talk about how we hadn’t won a playoff game for over 30 years. Last night was the first “away” playoff game they won . . . EVER !!

It’s hard to capture the joy and exuberance that I experienced when our rookie kicker hit the game-winning field goal as time ran out. I was clapping and screaming in my family room by myself and I didn’t care. It was wonderful to see the local media, social media and the entire city come together to celebrate. In fact, our local news is covering every possible Bengals aspect for the majority of each broadcast. It’s ironic to see how something so simple can drown out the noise, negativity and divisiveness that tries to fully consume every moment of every day.

What made Saturday’s victory over the Tennessee Titans even better was listening to the post-game press conferences. Every player and the head coach talked about the team as a whole. When pressed to talk about their own personal play and accomplishments, they deferred and talked about how other players did better. They are performing as a unit and they understand that each member of the team has something of value to offer. They wouldn’t be swayed to lift one individual over another. It was refreshing to hear how they’ve adopted a culture that proves that ALL succeed when you play TOGETHER.

Of course, it made me think of HR and organizations today. I think we aspire to have fully functioning teams made up of people who are aligned in roles where they can perform. I truly do. However, I don’t think we do all we can to organize our companies in ways that can make this come to life. I feel that most still follow old models of identifying “hi-po’s” and force rank people to falsely put people into more significant roles. Our approaches are still laced with inherent bias and a popularity contest where those we “like” can advance. It’s tiring for people to know how to maneuver the hidden internal politics on a daily basis just to ensure they have a place . . . at all.

It’s time to ditch the old models completely. They have never given us the sustainable outcomes we’ve aspired to. Never. Aren’t you tired of complaining about people who seem to be out of place? I don’t fault employees for this misalignment. I think it falls to senior leadership to be equipped by HR to get this fixed. What would your day be like if everyone was in their “right” place and all they did was perform? It would be magnificent !!

You see, we’re riding a short-term dose of euphoria as Bengals fans. We’re caught up in the swell of the moment. Nothing wrong with that. The difference is that the team already believes this is the beginning of how they expect to perform not only for this postseason run but into the future. They don’t want it to be another flash in the pan or flavor of the month. Sound familiar ??

I’ve been taking the approach listed in the picture above over the past year of having the right person in the right role for the right time. It’s tough to do. Honestly, you fight decades of how people have been crammed into roles more to fit a job requisition than being thoughtful in getting people where they can excel on a regular basis.

This is the good “hard work” that lies ahead of us as HR professionals as we navigate this new landscape of work. It has to happen if you want to see your people, and your organizations, thrive. I’m tired of decades of aspirations just as much as I was being a Bengals fan “hoping” that things would change. Do what you can to assess, realign and get people where they need to be. They’re longing for it personally and the company is yearning for a set of teams full of talent to move things forward.

My wife and I are fortunate to have two amazing kids !!  They do well in school, are active in our church and our community.  I’m proud to say that.  For those of you who have kids, or if you’ve even been a kid, you know that kids ask one question infinitely.  “Why ??!!”

It doesn’t matter if things are crystal clear and there’s no reason for this question, it happens anyway.  More often than not, I just want them to do what I say and have some faith that I am not leading them down some dark path with my request to clean their room. 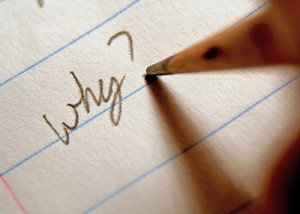 Recently, I heard a presentation where the speaker pulled back my eyelids on this question that often seems so annoying.  He explained that people in the workplace ask “Why” because they’re seeking context, not to annoy.  They want to understand the reasoning for decisions.  Seems to be a great trait actually.  I actually agree with him and when I sat back to think about it, I ask “why” all the time.  So, why do I get annoyed when others do it?

I think it goes back to the feeling that we’d like people just to do what we say when we say it.  If we have to spend time explaining things, then that means we’ve lost time doing something else that “matters.”

It’s time for all of our eyelids to be pulled back in HR.  If we’re not asking why for context, and even to challenge, then we can’t expect the status quo to ever move.  Just going along with everything doesn’t show well and we shouldn’t settle and sit back.  Also, we can foster a culture where it’s not only safe for employees to ask “why,” but it’s encouraged !!

If we continue to promote that we want a learning environment that focuses on development, then we must allow people to ask “why.”  What are we afraid of if we did this?  If employees felt safe, and inquired about their work, wouldn’t there be a greater chance of an enriched workforce?  How cool would that be?

So, start a new behavior today and allow people to ask that infinite question. This time when it’s asked, answer them.  Give them context and see what happens.  I think you’ll enjoy the results !!