We live in a world of “instants.” We desire instant affirmation, adoration and adulation. We are impatient during our commutes, the delivery of goods that we order or any time we are required to wait in any line of people more than one. We truncate our communication and make broad decisions based on snippets of words without seeking, or asking for, context.

We binge our entertainment and get frustrated when the next season may, or may not come out. For those who can’t even sit through an entire show, we consume TikTok and YouTube videos in larger volumes which ironically take the same amount of time. We have even bought into the thought that these behaviors help us “relax” when they seem to make us more entrenched in taking in more and more.

Put on top of this environment that we have raised at least two generations of humans who know no other reality. Every moment of their lives has happened at an exponential pace. Every. Moment. They only know immediacy and wonder why those who are older fight against what they see as normal. Add to this the rapid expectation of work, reward and advancement are pressing its way into the workplace and culture of every company.

Don’t think that I’m positioning this as a complaint. I personally am someone who has realized the climate I live in even though I’m old enough to remember when you couldn’t get access to almost anything you wanted instantly. In fact, the majority of my life has been lived before the age of instancy. It’s something that is starting to reemerge in the workplace. People want to know how to slow down, how to breathe, and how to develop.

I fondly remember the days when we had cameras that required actual film. It seemed nearly impossible to load the camera correctly with the roll of film the first time. You then had to advance the film until you saw the indicator on the back of your camera show the number “1” just to get ready to take a picture. After all of that effort, you had to hope that the scene you wanted to capture held still enough for the click of the button for the mechanism to close and open to imprint the negative image on the film tucked away inside the camera. You couldn’t even enjoy the picture you took until the entire roll of film had been used AND after you dropped it off to get developed.

Ironically, I don’t ever remember anyone complaining that this process took so much time. You had actual anticipation when you went to the drug store to pick up the prints to see if the pictures even turned out well. The issue of time was built into the art of photography whether you were an amateur or a professional. You couldn’t make it go faster. You were at the mercy of taking your time in order to enjoy the outcome.

This is what is reemerging in the workforce even today. People yearn to be developed more than being measured. They want the time and attention of their managers, their peers and senior leadership. Employees understand that this desire exists even in the middle of the mad rush of the day. Many are now choosing to make the decision to change jobs and/or companies. I think this is happening in part because companies are choosing to not take the time to develop people.

This is a giant blind spot. We keep fostering the myth that pace and production are far more important than people equipped to perform. HR would be an even more strategic leader if they’d be willing to step up and fight the myth. I have made a conscious effort to put development as a priority this coming year and going forward. It’s something that I hope to assess, define and create on a person-by-person basis from executive leadership throughout the organization.

I’m not quite sure what it will look like, but I know that it’s needed and that people are longing for it. Time is our best ally if we choose to use it intentionally as we continue to move rapidly. Development can happen in every company naturally as long as there is someone willing to stem the tide.

You see, I love that I can now take a picture whenever I want with the “camera” on my phone. I’m grateful for the advancements in technology that have improved this process because now I have more time to develop those I work with. Reallocate your time. Adjust who gets your attention. Take time to develop others. You’ll love the pictures that come from doing it well !!

Who here lives a “full” life?  One where it seems you never have enough time to get done what you wanted to accomplish?

The answer is that everyone has a life that’s full. What’s different for us is what we choose to use to fill it.  Whenever I hear someone say they don’t have enough time, I truly am skeptical.  It doesn’t seem like they’re bored.  In fact, when you ask them, they say they’re “busy.”  When you ask what they’re busy with, there is rarely a good answer because they really don’t know.  They just know they’re exhausted being busy.

Whenever I make a surprise phone call to friends, our first question to each other is, “So, how are you doing?”  I usually answer, “Man, I’m full and I love it !!”  Then we talk about the amazing things going on in our lives, our families, our friends and our work.  I do my best to get off the HR “what’s the new project” talk to make sure that we talk about all facets of our lives.

There are days that do seem to get away from me.  I’ve given up the notion that I control much at all.  Being in HR, I truly want to be in a position to move things forward while including everyone around me as much as possible.  I look at each day as a blank page. 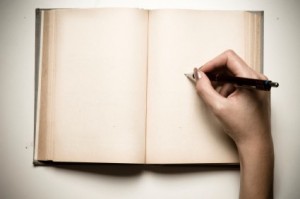 This isn’t some idealistic, pie in the sky, you really can’t live that way approach.  It just allows for things to happen at different paces and within the flow that they need to occur.

I mentioned last week that I’ve been on this crusade to list 3 great things a day in my journal.  At first, I looked at the blank page in front of my journal and the regular anxiety of what to write crept in.  “Would it be interesting enough?”  “Am I just going through the motions?”  “Did anything great really happen?”

Now, the words pour out of the pen themselves and I stop at 3, but I could write pages and pages.  You see, before doing this, being busy was easy and it followed the path of everyone around me.  I was frustrated.  I felt overwhelmed and out of control.  That’s lessened considerably because having the blank page is honestly welcoming.

As you start this work week, and your to-do list is already 14 behind when you roll over to hit the snooze button – stop, breathe, and start over.  Start with a blank page and let your day be filled with the great things that are sure to happen to you.

Remember, when you hit the office, you’ll be running into people who are already “full” and won’t be able to get past being busy.  Help them out.  Add them to your page and see what stories unfold !!